The Salmon Superhwy Initiative is one of the most impactful, inspiring projects on which I’ve worked. Beginning back in late 2013, I was asked by longtime friend and Trout Unlimited staff Alan Moore to consider an ambitious documentary that would serve as the creative platform for a nascent conservation initiative. Alan and I had brainstormed a lot of ideas while fishing together over the years, but this one really hit home for me. I did not hesitate to go all-in, committing to photographs and a short video to help launch the campaign. I had no idea that I would still today be working in support of this important effort, but I am grateful to be doing so.

Rather than attempt to outline the purpose, objectives and scope here with boring old words, I urge you to watch the campaign’s short video below. I filmed, edited and narrated this piece earlier this year: http://www.salmonsuperhwy.org/salmon-superhwy-video/


The campaign’s still photography work has been wide-ranging, from portraits to scenics to true documentary-style photojournalism. A selection from the most recent shoot can be seen HERE in the “New Work” section of the website; some additional content is located HERE in the “Conservation” section. 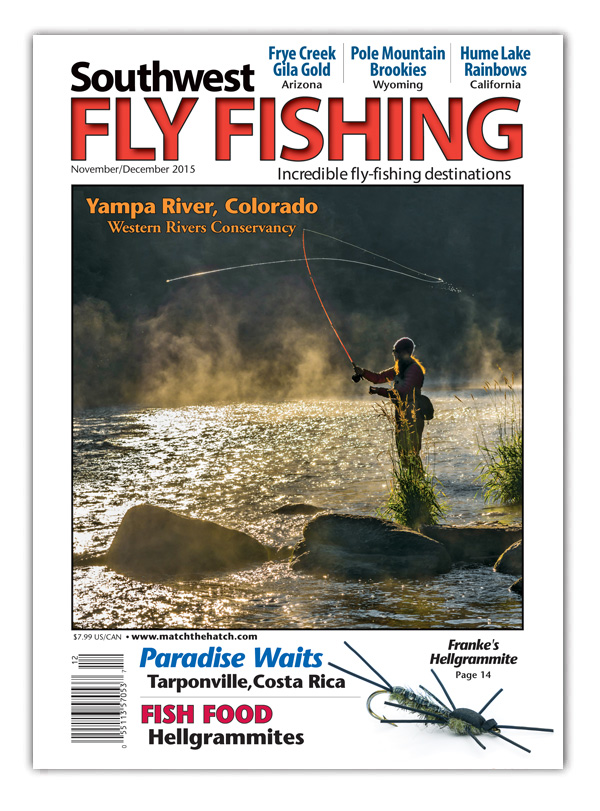 Since the new issue of Southwest Fly Fishing magazine is now dropping, I am happy to see one of my photos (with my wife as the angling model) on the cover. There are additional photos inside included in the “Exposure” section, supporting the good work of my friends at Western Rivers Conservancy. Check it out!

Three disparate Colorado locations, five days of shooting, not a lot of sleep, and plenty of quality truck time. At least it occurred at summer’s peak. Here’s a look back at one of my favorite shoots from this past summer, along with a brief recount of the work – highlights, lessons-learned, and what helped make the shots happen.

I’ve worked with Western Rivers Conservancy since 2006. During that time, I’ve had a number of opportunities to not only photograph beautiful places, but be inspired and energized time and time again. During recent years, the organization has become much more active in the Rocky Mountain west, including here in Colorado. When they asked me to shoot three different locations for potential future conservation projects, I jumped at the chance.

Schedules, particularly during mid-summer, are tough to manage. I was jam-packed with bookings, but was able to block out three days to try and squeeze the most out of every dawn and dusk. It was like the “good old days,” driving late into the night on twisting mountain roads, sleeping in the back of the truck beside my Pelican cases, living off convenience store coffee and snacks.

The only thing I regret is not having more time to spend in some locations. But, that is almost always the case. Preparation is a challenge when you’ve never been to a location, and gauging the spatial context is tough when all you have are maps and Google Earth. But, perseverance and stubbornness helped make the job happen. I’m now excited to see what comes of these precious pockets of Colorado beauty.

To learn more about Western Rivers Conservancy and their outstanding work throughout the western US, please visit their website. I urge you to consider supporting their mission, which has resulted in a tremendous amount of public access to recreational users.

The Gunnison River is one of Colorado’s marquee river destinations, and the Gunnison Gorge is considered to be one of the top multi-day whitewater trips in the lower 48. I had the opportunity to tag along with some new friends on a trip in early September led by Chris Mortimer of Gunnison River Pro. From beginning to end, the experience was incredible. An amazing river. Beautiful fish. Jaw-dropping landscape. I’m already looking forward to returning.

To view a selection of photos from this shoot, check out the “New Work” section of my website, or just click HERE.

I’m just now back from a mind-bending trip to British Columbia’s Dean River with Kimsquit Bay Lodge. Check out the new gallery of photos from the week on the website.

The Dean River is renowned among steelheaders from across the globe, and for good reason. It is home to the highest-quality fish on the planet. They’ve adapted to the Dean’s unique challenges by evolving the largest fin-to-body weight ratio. This enables them to power through enormous rapids and past staggering waterfalls to reach their spawning grounds. In addition, the lower river fish are almost always fresh from the salt, often caught less than a mile from the Dean’s mouth. This means the fish are white-hot and chrome-bright.

The Dean itself is sensory overload. Glacier-capped coastal mountains rise dramatically from the sea to soar over 7,000 feet in elevation. The water is turquoise green. The runs are classic, and, depending on flows, can be fished with heavy tips and large flies or floating line and skated dries. Every single swing holds the potential to change an angler’s life.

Kimsquit Bay Lodge is owned and operated by Jeff and Kathryn Hickman, two of the very best in the business. Lodge guides Steve Morrow and Mathew Moisley live and breathe steelhead, and just a couple days with them will make anyone a more effective spey angler. The lodge itself is situated on the saltwater of Kimsquit Bay, an arm of the Dean Channel. Chef Julie prepares simply perfect meals that are celebrations of each day on the water, often availing herself of fresh local bounty including prawns and crab. For the ultimate Dean River experience, book your 2016 trip now!

For those of you who don’t know me, I’m Russ Schnitzer, a professional photographer based in Denver, Colorado. My work is primarily editorial and commercial, though I try to emphasize lifestyle and conservation stories with a particular interest in the human dimension. My work is often seen in magazines and catalogs, on websites and in advertising. I’m a member of the Professional Photographers of America and the American Society of Media Photographers.

A website refresh was long overdue. Thanks to Rob Haggart and his team at aphotofolio.com, we’re rolling. With it, I’m forging ahead with an all-new blog. Here, I’ll share stories from the road, highlights from recent shoots, and bits of relevant news and information. Some content here will also provide a basis for a newsletter (coming soon). The primary purpose is to provide a personal connection to the work found on the website and in its galleries, and provide a forum through which to better communicate with those with whom I work, and hope to work with in the future.

Thanks for checking out the site. If you’re a creative director or photo editor and my style might jive with your story or client’s needs, I want to work with you. Please say hello via the contact form.